Free, public, National Forest and state Game and Fish firing ranges are found throughout the U.S. Generally, they are most plentiful in gun friendly states like my state of Arkansas.

Public Firing Ranges That Are Free To Use

Some, like the Brushy Hollow range at Waldron, Arkansas are beautifully maintained and provide excellent facilities such as covered shooting benches, target fences, clay pigeon stations and restrooms. Others are very basic and just functional. In any case, creative shooters can set up a great firing range with a few basic materials and a little assembly.

First, target backing is a staple item of any gun range. Backing obviously gets shot up quickly if you do a lot of shooting with other people.

I look for anything inexpensive, throughout the month to use as backing when we have our shooting group meetings. Old fence planks, Home Depot "culled lumber" sections, anything that anybody has dumped that can be used, I pick up and store for backing.

The target stands in the picture below are 2x4s and crooked fence planks that couldn't be used for building. They make great and nearly free target stands. 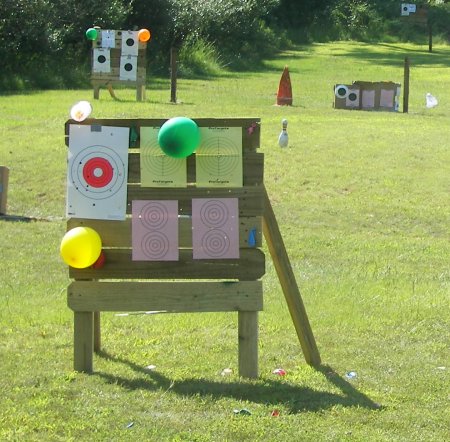 There is just no reason to pay for paper targets. Free printable targets are available from numerous web sites. You can make your own simple rifle or pistol targets from a graphics program on your computer.

Print your firing range targets on lightly colored paper and you have a highly visible paper target. That costs nothing more than the paper it is printed on. Balloons stapled to the target backing are also great fun to pop. We staple balloons on stands as far away as 120 yards away.

As far as flat, paper targets go, for pure satisfying drama on the firing range, step up to splatter targets. Available in all kinds of designs for every kind of shooting imaginable. The targets below can be patched over and over by repair dots you can purchase separately.

Countless targets, and repair materials like these can be purchased from Amazon.com.

Get Creative For Firing Range Targets That Entertain

The now infamous "Tater Tree" pictured below is an all time firing range favorite with our Christian Small Group, Right On Target. It consists of a five foot 2x6 for the "tree" with some finishing nails driven into it on the front and both sides.

A 2x4 is cut into 6 pieces to make the base. Potatoes are stabbed on the nails and you have a great bunch of "splatter" targets ready to go.

A potato will blow into a million pieces with a well placed shot from a .22. From a larger caliber.....well, it just gets better.

SIDE NOTE: Blowing up fruit is always a big favorite. Click this link to check out the vaporized melon shot by a .50 caliber jacketed hollow point.

Clay pigeons are some of the all time most versatile and inexpensive firing range targets available. Not only can they be used as what they are intended for - shotguns, but also make great pistol, revolver and rifle targets.

Note the clay pigeon "hanger" below. It makes for a challenging pistol target setup from around 30-40 feet. It's made out of just a few 2x4s and some clothes hangers cut in 12 inch lengths. Holes are drilled in the cross board and the hanger wires iserted and bent into an "s" shape that will both hold them in the board and hold the clay pigeons.

Before going to the range with a group, I commonly drill holes in 100 clay pigeons to hang them for targets. Clay pigeons also make great long range rifle targets.

All these uses and they also have a nice satisfying "klink" to them when they break. 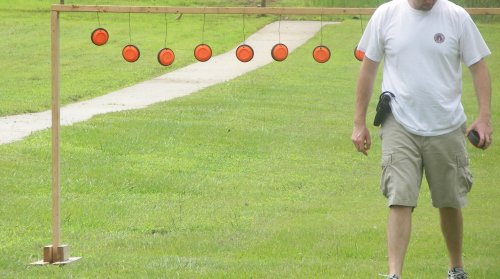 Bowling pins are very popular reactive targets, but may be hard to come by inexpensively. We got about 20 of them from a friend who had a connection at a local bowling alley.

Used bowling pins can be purchased online, but many bowling alleys already have their old pins committed to police and sheriff's departments for training practice.

If you do decide to purchase some, they are worth it. Easy to set up, extremely durable and a lot of fun to shoot. 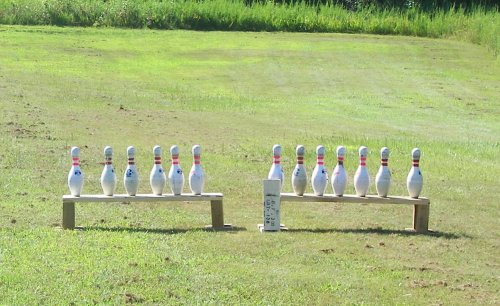 Skeet Shooting With Clay Pigeons For Fun On The Firing Range

Skeet throwers are great entertainment on any firearms outing provided you own a shotgun. If you don't have a good shotgun, they are within the purchase range of most people. Nothing on a firing range is much more satisfying than watching clay pigeons shatter in mid-air.

A Mossberg 500 pump 12 gauge that can be purchased at most any department store that carries firearms, will cost you around $200 plus tax. They are chambered for 3" shells and will shoot 2 3/4 inch shells also. Bird shot in 2 3/4 inch 12 gauge is dirt cheap (around $16 for 100 at Wal Mart) and well worth purchasing.

While if you troll around the internet, you will find all kinds of nonsense about Mossbergs, let me say that as an actual owner, they work. Period.

For $200 if you want one, get one and have a great time skeet shooting. The Mossberg 500 comes with 3 chokes to cover everything from bird shot to slugs for a wide range of hunting needs also. 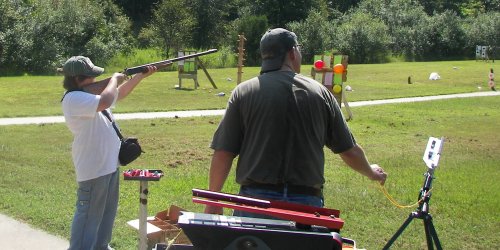 Now back to the skeet thrower. The one I have is portable, sturdy and does a great job of throwing one or more clay pigeons at a time. The portable jobs will not stay very well anchored with the ground pegs that come with them. We have piled big rocks on the base and it worked ok.

But we really found the workable solution when a friend gave me a big semi truck wheel. I drilled 3 holes in the wheel, mounted the thrower at the range and the thing is rock sturdy. It can be taken down to transport and assembled wherever you shoot. But whether it's a big wheel or something else, it needs to be portable and mounted to something heavy for best results.

Since this I have purchased a thrower that assembles around an elongated frame with a seat. The "puller" simply sits behind the throwing bar and pulls the string. Movement problems all solved. 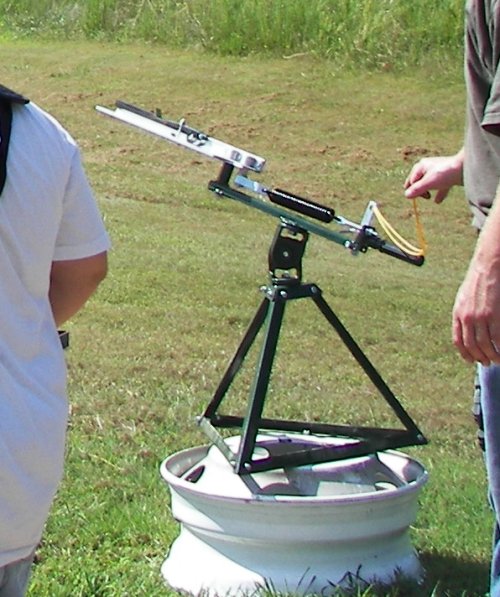 BOTTOM LINE: There are all kinds of reactive and (safely) exploding targets which are environmentally safe that you can make or purchase. Of course, your budget will probably determine how many you make as opposed to how many you purchase.

But wherever you live, if you can just find some bare ground with a backstop to shoot, a little creativity can produce a great firing range for hours of shooting fun.

Final word on creative firing ranges: This is a Christian based web site and as such I will always encourage extreme consideration.

On the Brushy Hollow firing range above, it would be very easy, after 3 hours of non stop shooting, to take all we wanted to keep and leave our junk lying around for somebody else. However, common courtesy and decency demands that anyone using any facility that they do not own, clean up after themselves. When we get to the range, many times other people have left their junk behind. We set up all our stuff, do our shooting and then go to work.

The range is always ready for the next shooters when we leave.

That means not only do we clean up after ourselves, but also after whoever was there before us. The range is clean, all targets removed, and the sidewalk and pavilion swept clean.

As Christian gun owners or as gun owners in general, we have a long way to go to improve people's perception of us. Let's don't give anti-gunners a reason to classify us as stupid rednecks for nothing more than being too lazy to take care of the resources available to us.