UPDATE 2022: My Bersa has been gone a long time. The screen shot you see just below is from the current product line, of this basic Bersa model of .380 pistols. There is also a 'PLUS' version of this line of pistols now, along with quite a few sub-compact, compact, and duty pistols, both striker and hammer fired. You can read about the .40 caliber model here. 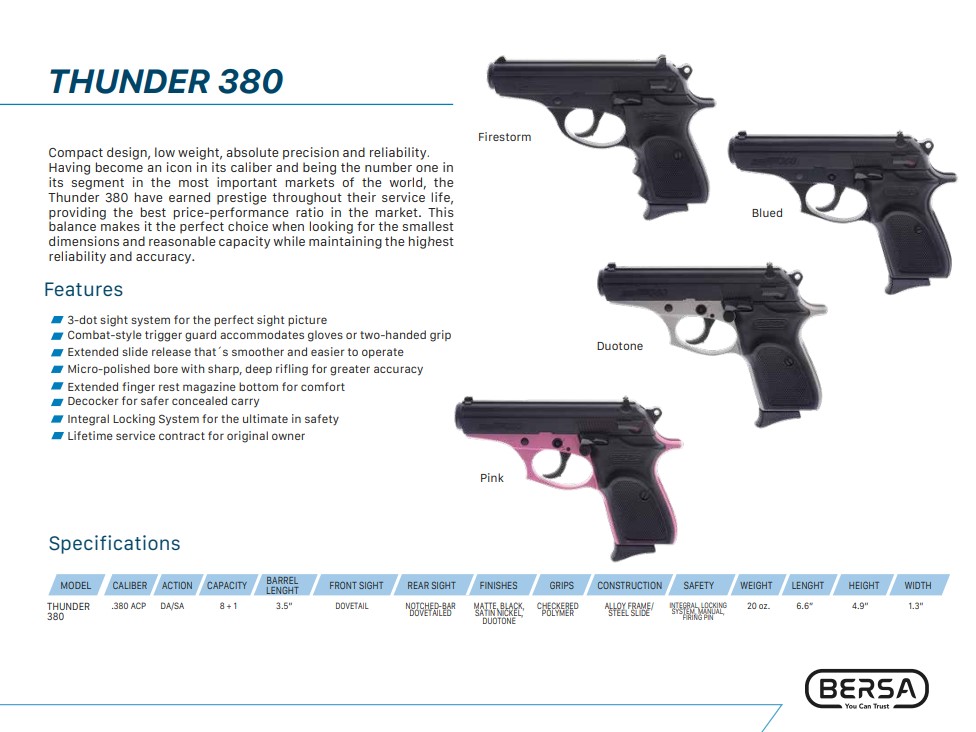 So the Bersa Thunder.380 is still being made, along with some other models. However, now it's no longer one of the best values. Lots of good, low price guns have flooded the market, making the Bersa one of a lot of others.

That said, it still has a reputation for solid quality, and dependability. The original article is below.

Still today, Amazon.com carries quite a few holsters for the Bersa Thunder .380, to meet most concealed carry needs.

The Bersa Thunder .380 semi auto pistol is easily one of the best buys in the concealed handgun world. Developed specifically for that reason, the Bersa is a straight shooting, easily concealable, dependable personal protection tool. The gun is a single action / double action firearm with external safety and decocker. 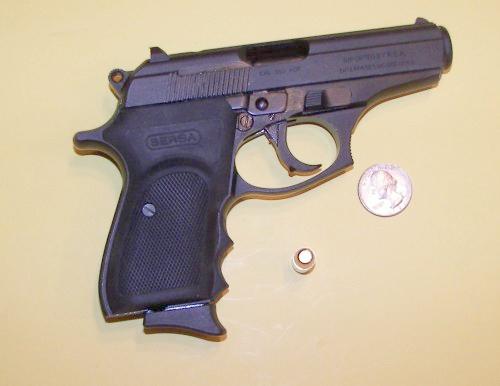 This gun is first and foremost a shooter. Any gun that you cannot grip, obtain a sight picture, control and shoot well will not serve you well for it's primary purpose which is to protect you. This gun does it in the shooting department.

In spite of it's small size the magazine sports an extension that allows the pinky finger to grip the gun which is important to those of us who hate "3 fingered grips" of handguns. It will fit a wide range of hands with the extension. The model with the rubber grips is very comfortable to hold and shoot. 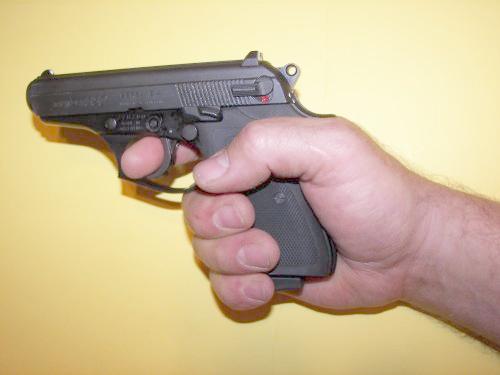 When handling the Bersa, you have the correct impression that this is a quality firearm, correct in it's size for what it is manufactured for, but heavy enough to let you know it is a serious gun that will get the job done.

The Bersa Thunder .380 is a fixed barrel design that lends itself to increased accuracy, important in a gun this size. The gun sports a rear sight that has a broad white outline. The front sight has a large white dot. The sights are very visible and easy to align.

The grip, fixed barrel, and good sights make for a small gun that is actually startling in it's accuracy for a gun this size. After I had owned mine for a while, I would practice using a full size gun. Then holstering that one, I would draw the Bersa and empty the magazine as backup gun practice. It became sport to me just to see what it would take to miss with this little gun.

Accessories for the diminutive but hardy handgun are numerous and concealed carry holsters for the Bersa .380 are plentiful.

There are two primary operational safety features you need to be familiar with when using the gun. The first is the magazine disconnect, which makes the trigger inert when the magazine is removed from the pistol (the gun won't fire). The trigger simply goes "limp" and will not move the firing mechanism until the magazine is reinserted.

The other Bersa Thunder safety feature you need to become intimately acquainted with is the safety / decocker located on the left hand side of the slide. The safety is not intuitive and requires practice to use it effectively.

When the first round is chambered, the hammer is back in single action mode. To carry the gun safely the gun should be pointed in a safe direction and the decocker pushed down. This will cause the hammer to safely drop down with the firing pin blocked.

The gun can then be placed safely in purse or pocket. Leaving the safety lever in the down position provides a double, but unnecessary, level of safety. Taking the safety off when decocked puts the gun in double action mode ready to fire, but safe to carry.

Be advised however, that the first shot will have a long, double action trigger pull (about like a small revolver), followed by the rest of the shots in single action.

BOTTOM LINE: The Bersa Thunder .380 is a great handgun in this size and caliber. It will serve you well with dependable performance, accuracy and your ability to conceal it. And at around $240.00 (real world price) it is easily one of the best tactical handgun values that you will find from any manufacturer.

Update 7/2014: I sold my Bersa several years ago, still a great shooter. Starting around the end of 2008 Bersa went through a few years' run of pistols that were problematic from the factory. We had two new ones on the range in our shooting group in early 2009. Both guns had a part break on the range while shooting.

Reports began to spill out on forums and websites about the guns having serious failures, broken parts, etc. It appeared that the ramped up manufacturing necessary just before and after the presidential election in 2008 resulted in guns in which quality control seriously suffered.

The good news is Bersa got back on track and within a couple of years were turning out the inexpensive but dependable guns they were renowned for. Today, the new firearms once again provide affordable and solid self defense handguns.