Well, Taurus produced a beauty when they manufactured this small, polymer coated, steel framed, monster .357 shooter. The Taurus M605 .357 magnum revolver would almost be worth having even if it didn't work; because it's so good looking. 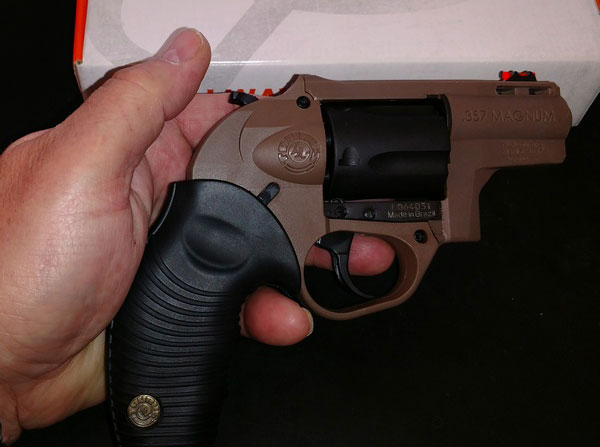 The gun is also known as the "Protector Poly", printed on the top of the barrel encasement 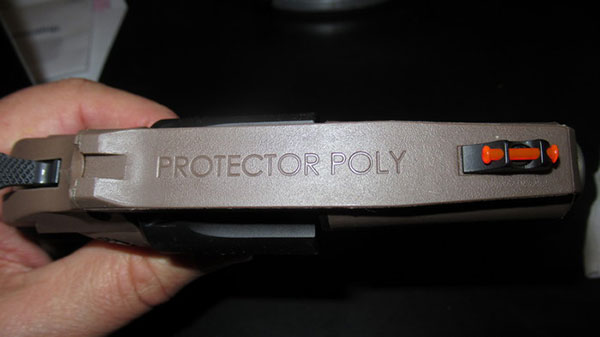 If you can't find this gun locally, you can order the Taurus 605 Poly, from one of my most trusted sources - Brownell's.

A leather paddle holster will serve you well with a small revolver. MASC Holsters makes excellent leather/kydex paddle holsters for all types of revolvers, including the Taurus M605. 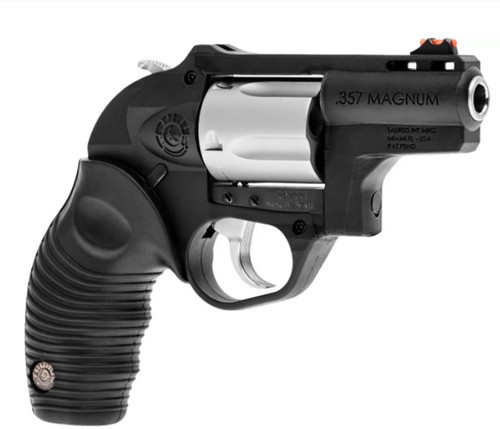 When I saw the gun in the case, I was immediately drawn to the diminutive revolver, because I had actually been without a .357 magnum for a few years, and I hadn't had one practical for concealed carry in about 8 years.

But this one fit all the criteria that I had to have to lay down the dollars to buy one right now. You'll read about them below, and see them in the (at least the second) video(s).

Taurus 605 Poly Protector Holster Update - 2021: When I purchased this gun at the first of 2019, there were not many holsters available for it. Now, because of its popularity, multiple major holster manufacturers like CrossBreed Holsters are making them to fit the Poly Protector now.

First, the gun is chambered and built for one of the most venerable handgun rounds on earth. The .357 magnum. Knowing that, I took it out for its first trial with 125 grain, .38 special +p, and 158 grain .357 magnum rounds. The muzzle velocity and power factors are shown below 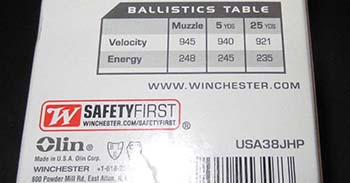 You can pretty much be aware of what's coming.

Grips On The Taurus M605

But in knowing that, a particularly attractive feature of this gun, right up front, was the full grip that came on the gun in the box. While a shorter grip comes with it, that was of no interest to me.

If you're not aware that you need to get a full hand grip on a revolver like this, take one to the range and load it with full house .357s.

It won't take long to get the idea of why. Every ounce of every aspect of control is critical when considering actually using, and carrying a gun like this. 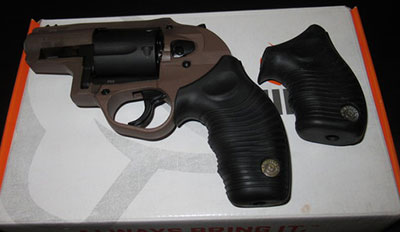 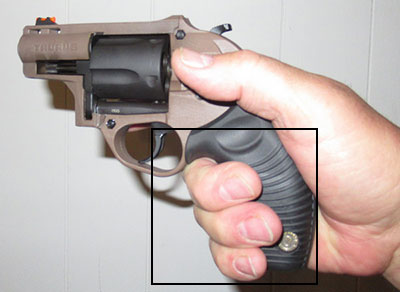 Sights on the gun are kind of unique, with the rear sight molded into the gun, but strangely enough, adjustable for windage, using a hex wrench. Go figure. 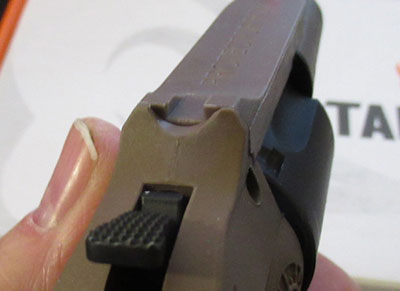 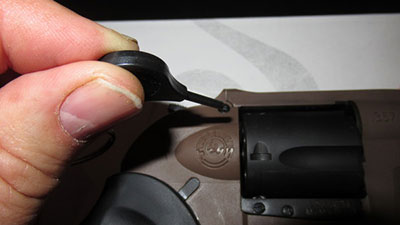 The front site on the Taurus M605 is a fiber optic rod that is easily replaceable if (when) you lose it. The orange one on this gun looks like you could see it from a half mile away in the sunlight. 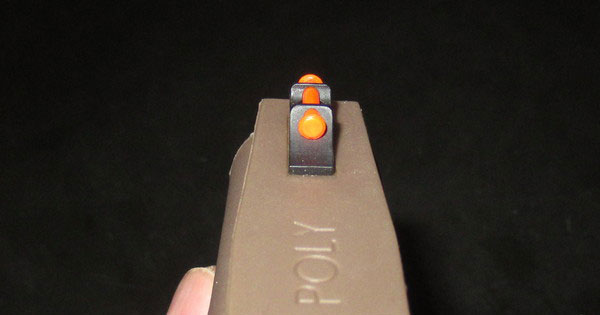 I knew in getting used to the gun, the .38 special +p was not a round I was wanting to carry in this light .357 with a 2 inch barrel. But I knew what the likely consequences of the full house magnum rounds would be.

I was correct in my expectation. I started with the .38 special +p rounds, but that didn't make news. Just getting used to it, the gun was pretty difficult to get on target, even with those.

It was like getting the palm of my hand hit with a steel pipe every shot. A miserable shooter.

Now, in all this, it was clear the gun would shoot where I aimed it. But the painful felt recoil made it almost impossible not to anticipate the pain of the next shot. The picture below kinda illustrates what's taking place in that short barreled revolver when the trigger is pulled. 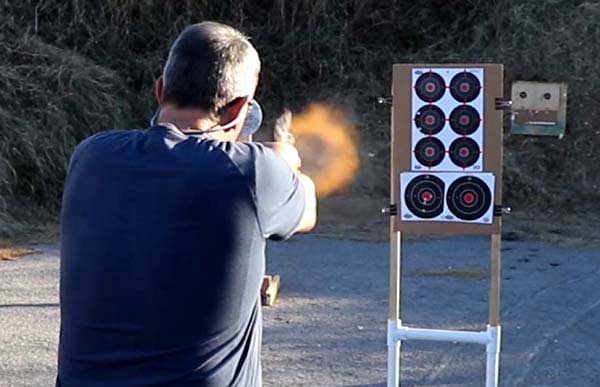 That orange ring that only the HD camera lens caught, (not my eye), is fire dissipating into the air from powder blown out the short barrel before it was actually used to create any velocity.

I stayed with it for a while, long enough to know that neither of the rounds I started with would be rounds I'd carry in the gun.

One didn't produce enough power. The other was a brute to control. And a painful nemesis to practice shoot with.

So, I went to what I have known to work historically in short barrel .357 magnums. That venerable cartridge loaded with 110 grain bullets and powder to push it at a fierce velocity, though well beneath that of the full, heavy loads.

I knew the balance between power and control was indeed achieveable.

Then the sweet spot was born. 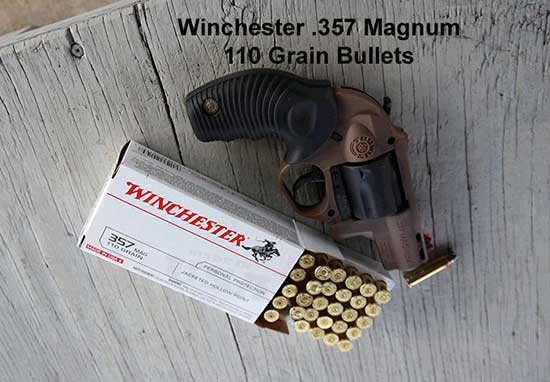 I took the gun back to the range almost 3 weeks later with the Winchester 110 grain bullet loaded cartridges shown above. The world of that little Taurus m605 .357 magnum Protector Poly changed like with few guns I have ever shot.

Watch the video below and you'll hear one of the sweetest sounds in shooting. The sound of a magnum round hitting a steel target.

Suddenly, I was thoroughly enjoying shooting .357 magnum rounds through it. Still plenty of power. But controllable. No forced anticipation of pain. Tactical placement of all rounds.

Accessory Update: When I wrote the review, the gun was new to many markets. Now, there is a pretty extensive line of holsters available for the Taurus Poly 605 Protector on Amazon.com.

The hammer is not very pronounced, sticking from the shroud, but it's so heavily textured, it seems to grab your thumb when you reach to cock it. 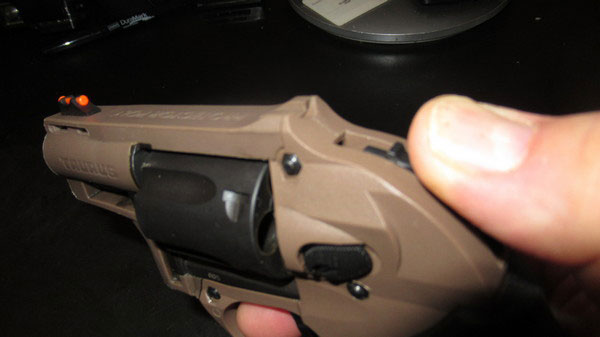 And with the hammer thumb cocked, the great news was, I didn't shoot the hostage.

The .357 mag. 110 grain bullet load is the round that belongs in this gun for practice, fun, and serious concealed carry. It doesn't mean you won't find another round in between this and the 158 grain loads, but this will get it done for anybody.

With all loads mentioned, I shot at bulls eye targets, silhouettes, and steel. When I finally found the round this gun lives for, all of it was fun and satisfying.

And helped produce the confidence needed to carry the Taurus M605 Protector Poly for self defense.