If you’re pining for some kind of rifle, but just can’t scrape the bucks together, you may need to look no further than your local pawn shop for the SKS Carbine. This abundant military surplus rifle was originally manufactured in Russia, later to be copied in manufacture by several countries including China who produced the rifles on machinery supplied by Russia. But it’s not my intent here to give a history lesson.

I’m reporting as a shooter who has a load of fun with a rifle that is inexpensive to buy and shoot. And the SKS carbine is not just for plinking. It can make a significant ranch gun or decent deer or varmint rifle to boot.

At just about any pawn shop and independent gun dealer in America, you will find one or more SKS carbines from Russia, China, Yugoslavia……or wherever.

Some original Russian rifles are collector’s items today and are very expensive if you can find one. But assuming you are looking for an economical rifle to shoot, the ones that line the shelves of gun shops can normally be had for under $200.

If you pay as much as $200 for one, you should get a refurbished one in great shape with bayonet, sling and maybe some other stuff. Mine is a Chinese SKS complete with “spike” bayonet. It is a refurbished model and looks pretty nice. My SKS carbine was $180 at a local pawn shop. 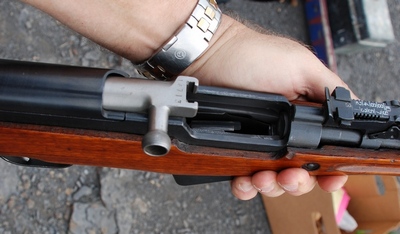 I and others have shot my SKS carbine so much that I can’t even begin to guess how many rounds have been put through it. At this writing, the inexpensive 7.62x39 ammo is still less than 5 bucks for 20 rounds at Academy Sports.

The gun devours this or any military ammo like a glutton. The SKS carbine is a semi automatic top loading rifle that has a 10 round drop-down magazine. 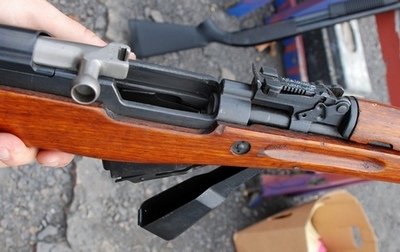 There are aftermarket 20 and 30 round magazines that can be used in the SKS carbine. Though my experience with them is that they are more trouble than they are worth.

The gun is not made for them, consequently there are some little irritating oddities using them that may or may not put you off enough not to use them. Either way, the gun will shoot and shoot until you can’t move your trigger finger. While nothing is indestructible, these rifles give the impression that is not the case.

Recoil of the SKS carbine is minimal but I have added a stock pad to lengthen the stock 1”. Without the pad, the stock is too short for me and feels odd having to adjust for it. The 1” added by the pad gives just the right placement on my shoulder. Below is a video that shows the mild recoil of the SKS.

These are not pinpoint shooters, nor is there a viable way to mount a scope on them without some pretty serious modifications. That can easily cost well more than the rifle itself.

Mounting a scope to the rifle without changing anything requires cutting off the bolt handle and replacing it with one that bends down. It also requires drilling and tapping the dust cover to provide holes for a mount.

Top mount screw in bases are a waste of time and money, and will not hold a scope in place long. However, some people buy these guns, modify them with scopes and other devises and produce some pretty unique shooters.

I’ve seen one at a gun show that I did not recognize as an SKS carbine.

The barrel and action was mounted in a poly-collapsible stock. The receiver was an aftermarket item that made mounting accessories possible. It was all black and sported a scope, laser and flashlight. That’s all just to show what is possible with one.

But having said all that, the bare bones, open sighted SKS is what most people are looking for to shoot. With the open sights, the gun is plenty accurate to dear or varmint hunt in states like Arkansas where shots over 100 yards are rare with the heavily wooded areas they’re typically hunted in.

The gun is a load of fun just to go out and plink with blowing up milk jugs and other things that splatter. And considering that 100 rounds of ammo for the gun is only around $25, shooting is guilt free.

Bottom line: The SKS carbine is a rifle to keep and keep shooting. No reason to trade it for anything because of it’s low financial value and the great fun you can continue to have with it. If you don’t have a fun rifle, check out your local pawn and gun shops. There’s an SKS carbine waiting there with your name on it.