The Right Attitude For Concealed Carry

This is not for someone brand new to handguns and entertaining the notion of getting a concealed carry permit. That's exciting to anybody, insofar as the anticipation is concerned.

This is for people who have at least some experience with handguns, and carry their weapon(s) with or without a permit. 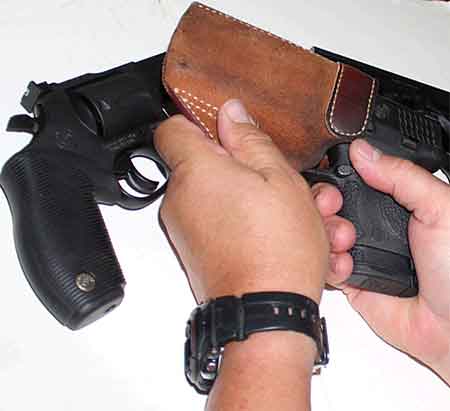 The Fantasy World Of Concealed Carry Excitement
It's that large segment of the U.S. population that now carries handguns as part of their daily routine. A routine as common as getting dressed.

To anybody who finds your concealed carry exciting, you better step back and examine your attitude.

Exciting? What's exciting about it? You have a gun attached to you or within reach somewhere.

A gun that is presumably ready to fire or can be ready in a couple of seconds. A gun that is there for an event in the gravest extreme should you absolutely have to use it.

That should be boring. Boring because once you get it tucked in and concealed, you shouldn't have to mess with it.

You shouldn't have to do anything else that requires your hand to come in contact with it, unless it is required that you remove it in some location.

If you are not in law enforcement or in the military, the purpose of carrying a gun is not to be the savior of everyone in the city.

Statistically, an act of criminal assault on you personally, in which your gun would be effective is obviously possible. But the gun being effective largely depends on the user, and their understanding of what it is and when to use it.

Effective, meaning you would have time to access it and use it before the criminal had time to knock you down, out, stab you, or shoot you because he planned just a little before attacking you.

That means for almost everybody, the presence of the gun should be boring. Boring because it's not there for anything except to be still and generally not be used.

It's there for the gravest, life threatening "just in case" only.

Carrying a gun, believing it's an end-all to self defense is a fools imagination. The chance to use a concealed handgun legally and effectively in self defense is limited to all 4 factors together below:

Use it before #3 (as they attack) is defined, and you'll likely be arrested and charged with anything from brandishing, to terroristic threatening, to assault with a deadly weapon, battery, and in the worst case, murder if you actually shoot somebody.

Not being ready to do #4 right can cause a lot of damage to you, other people, and property.

What's Likely In A Brutal Assault

It's likely in a criminal assault that you'll have to use your hands, feet, elbows, knees, keys, or anything in your hand or within reach to put off an attacker. That's even if the eventuality is the gun is necessarily used. Criminals don't often give advance notice when they assault someone.

If they're too close for you to draw your weapon when you notice them, you better be ready to stop the attack somehow, at least momentarily until you can access your weapon.

So, being "excited" about carrying a handgun is not a plus by any means.

Here's how it works - for real:

Learning your handgun, practicing, getting licensed, carrying it, continuing to practice - all for one thing. Self defense in the gravest extreme if you do it right. Failure and possible loss of life at the hands of one or more criminals if you do it wrong.

Work to make it boring by the learning, practicing, carrying, continuing to practice and learn. Master those to take the "excitement" out of the mix, replaced by understanding of what it all means.

I'm for every responsible, law abiding adult arming themselves against criminal assault.

But I'm also providing a dose of reality about what that handgun you are carrying or thinking about carrying is.

Exciting is not it.