If you had wanted to go to the safest place in the nation today, you could have gone to the Second Amendment rally in Richmond, Virginia.

This is something we try to get across to liberals and other jelly-kneed gunphobics. (How do you like that new term?)

The picture below shows just the fenced gun-free area immediately adjascent to the capital. Around 6000 unarmed people just in that one area. 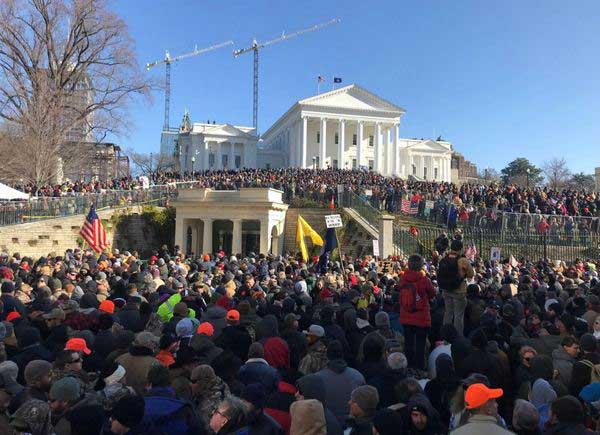 Thousands more in the sidewalks, streets, and any legal area available outside the gun-free zone.

Armed militia marched outside this area, until it became too crowded to march.

All peaceful. No one shot. No white supremacists. No neo-Nazis. No redneck violence.

How could that be?

This was a crowd that meant business.

They were not going to let some low-end criminals come in and break the law, distracting from the legal and just cause they were insisting on.

And those same kind of law abiding gun owners all over the country, in whatever numbers they gather in, are the best deterent we have available today to prevent random, and mass shootings in schools, churches, concerts, malls, etc.

Guns And Criminal Shooters Are Not Going Away, But ......

Guns are too numerous to get rid of in America. The Second Amendment of the Constitution protects the inherent right of citizens to keep and bear arms.

For those who keep arguing about using trained, armed personnel to protect our most important institutions, including our grade, middle, and high schools, consider this.

Actually, just privately ask yourself this question. That way you might give an honest answer if you don't have to advance your ideology.

Imagine your child of any age in school, a gunman entering, and beginning to shoot. You can imagine any scenario with anybody you love, but if you have kids let's continue with this.

You may have developed a hatred for guns. A hatred for anybody who advocates their use. You may have expressed how terrible they are, and how only police should have guns.

Would you want somebody there to shoot back?

Answer the question sanely before you let your philosophical ideology cloud your judgement.

No, the only thing you have to worry about is the imaginary non-facts about gun use to secure our most important places. Maniacs and murderous criminals are what the threat is.

People armed with the tools to deter them or stop them in their tracks is the immediate solution.

Your support for the Second Amendment is what it takes to keep the ability of those people secure.