The Remington 700 VL SS Varmint Rifle had that effect on me, that makes it just roll over and over in my mind after the first time I saw it. Having developed a liking for relatively small, fast moving bullets and low recoil rifles, when I saw the VL SS for the first time I think I salivated over it.

Not the caliber or the potential for accuracy, but the fact that it looked so stinking cool. 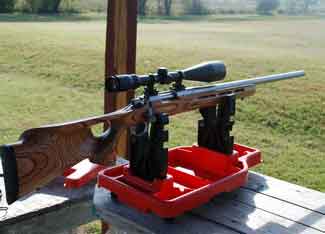 I couldn't hardly stand it. I went back to the store where I found it and looked at it several times. Did some research, looked at it again, and then.........the predictable. The Remington 700 VL SS Varmint Rifle became mine.

Now the only thing I had to do was figure out what the heck to do with it. As most of my readers know, I'm not exactly a rifle expert. While some of my rifle shooting friends crow about their 400 - 600 yard shots, I'm pretty happy with a tight 100 yard group. At the time I bought this rifle I had only made a few shots at a 300 yard target with only one bullet striking on the target face. After that, I stuck with my 100 yard shooting. But the Remington 700 VL SS changed my desire to hit that 300 yard target dependably at the Old Fort Gun club.

So, I got a decent scope, the Bushnell 3200 Elite 3-9x50 rifle scope. For the price, Bushnell has a good reputation for clarity and durability, plus the Remington 700 VL SS was not going to be a heavy recoil producer.

I bore sighted the scope at home then went to the range to sight it in at 100 yards. I let it pose for the camera on the plastic rest in the pictures, but did my shooting from an adjustable "Steady Rest" rifle rest. The Steady Rest is actually not so steady and the Remington 700 VL SS had to be held pretty tightly and correct breathing was necessary to produce accurate shots.

Before going to the range I adjusted the trigger on the 700 VL SS to approximately 2 lbs from the approx. 6 lbs coming from the factory. All Remington 700 rifles have adjustable triggers and there are web sights that give detailed instructions on how to safely adjust them. If you are not comfortable adjusting yours, take it to a gunsmith that will be able to quickly do it. I successfully adjusted the trigger in about 15 minutes including take down and reassembly of the rifle stock and action.

All shooting for this article was done with Federal Premium V-Shock 55 grain bullets traveling at approximately 3650 feet per second. The 100 yard target was the result of me firing a full 4 shot magazine from the Remington 700 VL SS at the center of the target. Forget the flyer to the left. The center 3 shot group is spread about nickel size. 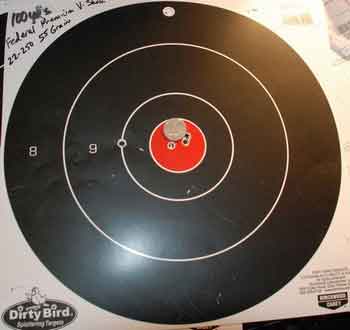 That's where the rifle was sighted in. Because the bullet is flat shooting out past 200 yards, no adjustment was necessary to make reasonably accurate shots on the 200 yd target. 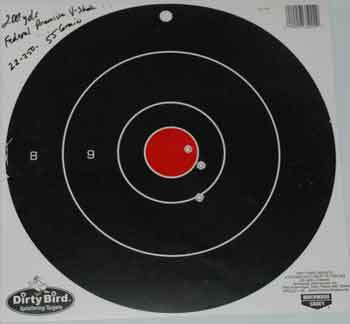 But out to 300 yards was something different. I knew the bullet would take a significant drop by 300 yards so I took a large piece of poster board, stapled it to the target backing and stapled the target to that. I took 3 shots at the center of the target from 300 yards and went to check my results.

The bullet dropped about 12" at the 300 yard mark. So, I adjusted my aim to approximately 1 foot above the target center. The results are below. 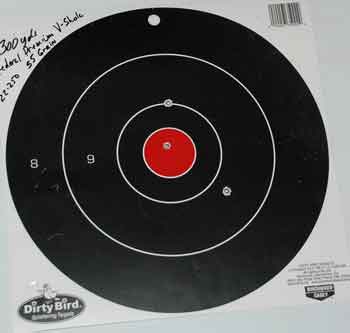 The adjustable Bushnell scope made seeing the center of the target, even out to 300 yards, easy. Any of the shots would have been kill shots on any small game up to coyote size. And, in the event of a zombie attack, head shots at 300 yards would be very possible. You don't want to let them get too close, you know.

The maximum effective range of the 22-250, with factory ammo is considered to be approximately 400 yards. That would be in the hands of a gifted shooter. Ammunition loaded for maximum velocities can be effective out past 500 yards. For average shooters like me, with factory ammo the effective range would be closer to the 300 yards I shot it at. From the results I got with the Remington 700 VL SS, I'm sure that on a Lead Sled or other heavy recoil reducing rest, the gun could drive nails. I'm just not good enough to make it look as good as it is. Remington claims that these are the most accurate factory rifles they make.

Recoil of the rifle is minimal, and long, comfortable shooting sessions are easy on the shoulder. This type gun is not really made for the woods of Arkansas where game shot at less than 100 yards is the norm. But for coyote hunting or other varmint hunting on high wooded ridges with a mounted bipod would make for great sport. The gun is just too heavy and unwieldy to go traipsing through the woods with it.

The thumb hole makes for a good, secure grip when making the long shots with the Remington 700 VL SS. 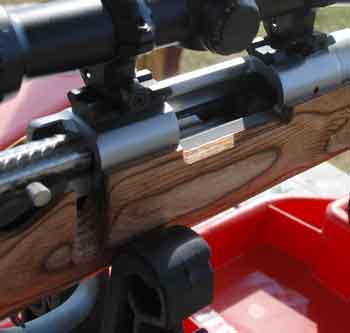 BOTTOM LINE: This can be a precision rifle with the right gun rest, and in the hands of the right shooter, with the right ammo (depends on a lot of “rights”). In my hands over the long haul, it will be wasted as to it's potential. I will probably keep it for a while to have some splattering fun with it and then sell it. Hopefully to someone who can wring out the last bit of practical and accuracy use from it. The Remington 700 VL SS is a great looking, precision shooter capable of getting all the potential from the cartridge it's made for.

UPDATE 2017: While the 700VLSS has long been gone from my possession, the rifle line lives on with Remington, in the VLS gun shown below. Absent the thumb hole, but in the same several calibers, and with a few updated features, the gun is a worthy consideration for range or field.