Intelligent Use Of Your Concealed Carry Pistol Or Revolver

For the law-abiding, there is a defined purpose in carrying a concealed pistol or revolver.

Not aggressive pursuit of use of the gun because we "like it". Not so we can show it off to the inquisitive. Not because we have some media fantasy of a heroic shootout.

And any overt handling of that gun anywhere except on the range or in your home, can result in an arrest. But that can extend even to what we believe is in self defense.

Which is where intelligence in concealed carry comes into play.

Keep in mind that the scenario below is just one example of how this can work. It can be performed in warm weather clothing, under different conditions. Don't get locked in to one method of concealed carry.

The concealed carry scenario pictures below illustrate what the video shows in detail about intelligently dealing with a possibly threatening situation. The first picture shows a reaction that could land an otherwise law-abiding citizen in jail.

Premature Threat Posture With A Handgun 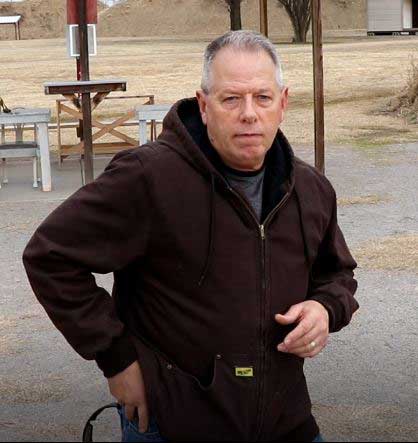 The posture at left is turning and grabbing the grip of your gun to show somebody you have it.

It is considered brandishing, and when done in a clearly threatening way, can result in the gun owner ending up in jail.

The act is often done with some concern about who is approaching.

But if it changes the behavior of somebody with no ill intent, and they report it, the gun owner will likely be facing assault charges.

Carrying your gun, and reaching for it can be done in much more discreet ways, that leave the person or people approaching, without cause to call the police on the gun owner.

The scenario pictures illustrate what the video shows in detail about intelligently dealing with a possibly threatening situation.

It shows the progression of a situation in which a person sees, questions, warns, and finally draws on a threat. But the gun is only shown when the threat is as clear as possible.

It does not allow for an unsafe or compromising act from the defender carrying the self defense firearm.

Non-Threatening Posture With A Ready Handgun

There are innumerable ways to carry a handgun that are non-threatening, even when you may have your hand on the gun.

Unlike the picture above, the carrier is able to keep his/her hand on their gun while speaking to whoever is approaching them.

This gives them the time to determine whether there is any threat, without showing the gun, and possibly scaring somebody into panic.

The person with the CC gun is prepared for maximum response, if necessary, but not threatening until fully cognizant of an actual threat. 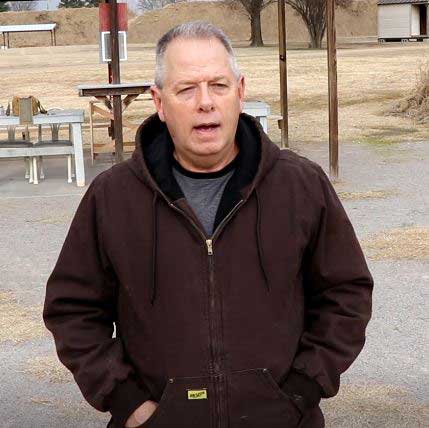 Strategic Readiness And Threat Deterrence Without Brandishing Your Handgun 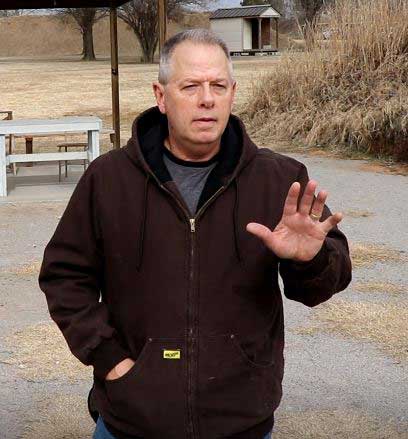 In the photo at left, the cc handgun holder is cautioning the threat, still without showing the handgun.

This is a reasonable posture to tell someone to stay back, while questioning what they want or need.

With the left hand in the pocket, it will probably let a criminal know it's wise to move on. But it's without actually showing a gun or issuing a threat that may bring law enforcement action.

Up to this point, the person with the cc gun has not given anyone reason, except verbally telling them to stay back, to drastically change their behavior, or panic.

All while still staying ready to deal with a confirmed threat.

The CC gun owner has been ready all along. But he/she has done nothing to inadvertently cause anyone not threatening them to panic.

At this point, the threat is confirmed. Gun drawn with no further options except with the intent to stop the threat. In the gravest extreme, it may necessitate firing on the threat to prevent grievous injury or death. 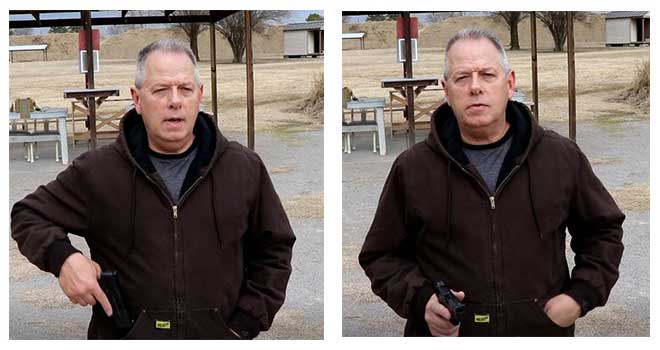 Intelligent use of our carry guns will allow us to provide maximum protection for us and our family.

All while staying out of jail for wrong moves, made in haste before a threat is confirmed.