The correct handgun sight alignment factor, as with others, is different for different guns and various shooters’ tendencies. Many gun owner’s manuals include the best way to align sights for that gun.

That will be for the sights that come on that handgun. Of course, changing the sights on the gun may change the best way to align the sights. The only way to work out what works best for you is to practice shooting the gun.

This is a good place to say that some of the best tactical sights I have found, that will work on virtually any semi auto they are made for, are TruGlo Night Sights.

Some of their sights combine fiber optics with tritium. They shine like emeralds in daylight, and like green flashlights at night.

Then, (and this is challenging when you are a new shooter) focus only on the front sight with your eyes while keeping the sight on the target. 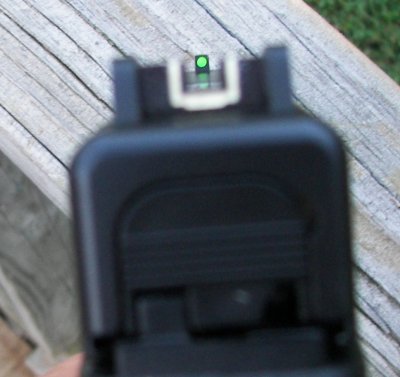 Effect Of Focusing On The Front Sight Only

This goes against everything in your mind and reflexes that tells you to focus on the target. But focus only on the front sight.

For help in mastering this, try to use some reactive targets sometimes when practicing. Reactive targets are anything that splatter, burst, break, make noise or fall over. Practicing with these type targets gives you the visual while keeping your eyes focused on the front sight moving it from target to target.

In general, life shooting a gun is easier if you can acquire your target and shoot effectively keeping both eyes open. It is quicker to acquire the target and if moving while shooting it will improve your timing and balance.

However, many people, because of vision variables, are simply unable to focus with both eyes open. They may experience blurring of both sights or double vision when trying to focus on the front sight.

If that turns out to be the case with you, close the non dominant eye and shoot away. Most instructors will teach you to shoot a handgun with both eyes open. Military combat types will tell you in combat, it’s dangerous to close one eye.

But you have to remember that it’s also dangerous to point a gun at something you’re seeing two of. If you need to, close one eye to shoot. It is not going to make an earth shattering difference in your safety level if you have to use the handgun in self defense.

The most important thing is to hit what you are shooting at and not hit an innocent bystander.

Next: The Handgun Shooting Stance