Generations Making Up Their Own Version Of Christianity

2021: 'The Church' is alive and well. It is not the 'problem' of any generation of self absorbed, woke, pseudo-Christians, that have accepted murder of the unborn, and all forms of deviance as their standard of social 'justice'. That while casting off all Biblical standards of acceptable behavior.

The following is a broad generalization, and should not be taken to include everybody within a defined generation of people. 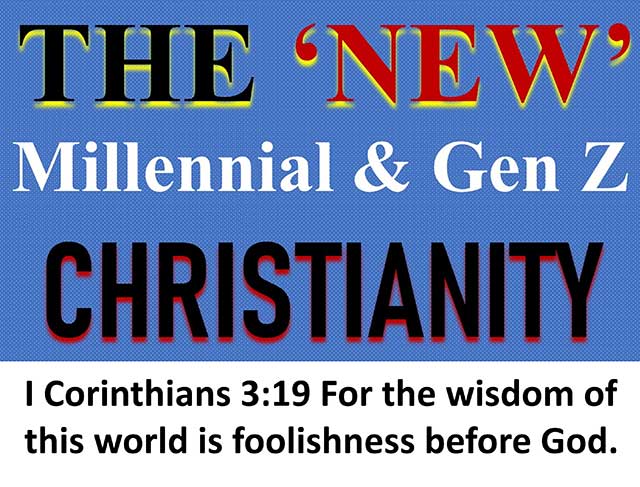 The title tells the story of many in our latest 'generations' (defined by letters and single word descriptives, with the latest 'Millennials' and 'Generation Z').

I'll preface the rest of this by saying , if you and your peers are leaving the church in significant numbers, the church of this age is not your 'problem'.

Yeah, no worse now than then. A perfect ideal, run by imperfect people.

Now you can find endless statistical research and analysis, referencing their attitudes concerning being disciples of Jesus Christ (Christians).

And yes, I have read it until I am thoroughly nauseated by it all. That having to look and listen to what appears to be increasingly 'intelligent' reasons for rejecting fundamental, Biblical scripture as a baseline for their beliefs.

Nothing intelligent about it.

For Centuries. Long before Millennials or Gen Zs existed.

Jesus has never changed (Heb 13:8  Jesus Christ is the same yesterday and today and forever.)

But increasingly, the latest generations listed above have taken a broadly 'diverse' attitude of acceptance toward actions that scripture defines as narrowly and inherently sinful and damaging.

In reading from, and talking to people in these generational age ranges, I have heard consistent, and unfortunately parroted language to describe why they have mentally 'morphed' the teaching of scripture to fit their own sensibilities, and resulting invented narrative.

Keep in mind, that the latest generations, live in a media driven world, that serves up its own values, including its take on religion to everybody, everywhere. The current generations live in that more than any generation preceeding them.

Anything negative here about "organized religion", which is one of the most absurdly parrotted terms from people negative about Christianity, and church life in general.

In summary, the reality of Millennials and Gen Z's protests against 'organized religion' are nothing but an attempt to 'blame the church' for their own lack of acceptance of Christ, and of scripture that exhorts all believers to a clear standard of behavior.

Bottom line with Millennials and Gen Z: Blame the church.

It's better than admitting they reject the Bible, accept all types of deviance in the form of 'social justice', and don't want to follow any scriptural standard of morality.

While all local churches have difficulties and problems (being run by humans), the problem for Millennials and Gen Z is not 'the church'.

It's the lack of solidly defined moral character in generations fed their morality digitally in a media driven world, that they have accepted above scripture, and above Jesus Christ.

The 'problem' simply defined, is Not Christian churches and their adherence to Biblical scripture, but a broad lack of solid character in the generations that now define where our country is headed.

Aside from all that, people from the generations mentioned here, who have not been seduced and taken by the snare of media morality, who are able to boldly keep their commitment to Christ,  have both my admiration and appreciation.