[CAUTION: Articles illustrating drills, by the Christian Gun Owner, are intended to allow for solo practice with a handgun. They are to improve proficiency in movement and handling, for self defense in potentially life threatening scenarios. While they may help improve reflexes, they will not improve fitness, actual hand-to-hand fighting skills, or reaction under stress. Those skills are developed by competent instructors, specific force-on-force training, and ongoing practice.]

Practicing To Shoot An Attacker While Performing Close Quarters Defense

This is another solo handgun drill to practice guarding your head, face, and neck with one hand, while drawing and shooting with the other. Practice, producing instinctive performance of these moves could be life saving in a potentially deadly encounter.

Please keep in mind that your gun should only be used when you fear that your life, or the life of your family is in clear and immediate danger of injury or death from a criminal assault.

The video below provides details and a visual example of how to practice this close quarters defense drill.

For Your Safety: It is wise to do this drill in it's entirety, multiple times with an inert training gun, or at least an unloaded, cleared pistol, before doing it with live ammo. It's not a "natural" feeling drill to undertake, and takes some time to get smooth in the movements. Remember to treat any training gun like it's a firearm with live ammo.

Note the progression of this Close Quarters Defense Handgun Drill below.

1) The defender guards and reaches to draw. 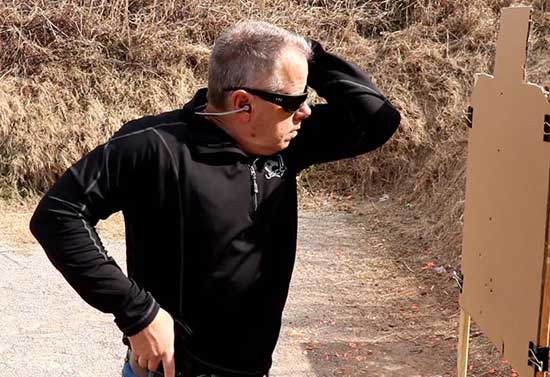 This should be practiced until almost automatic. To perfect the drill, this one move should be practiced over and over, until natural and fluid for the shooter. Getting immediately in position to defend yourself is critical in a close quarters, life threatening encounter.

2) The defender draws the gun hand high and tight to the side. 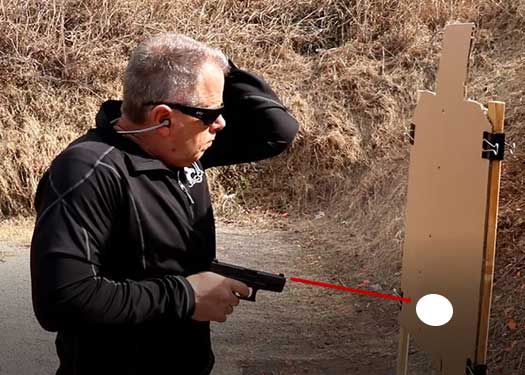 From this close to the attacker, the first shot will be fired from this position, without reaching out with the gun hand. The shot will be down into the groin area. This first, critical shot is meant to back an attacker off while minimizing collateral damage from people, houses, cars nearby.

Keeping the other hand up in defensive position beside the head or across with the elbow out in front of the face is critical. This is to both to keep up effective self defense, and to keep from shooting your own hand or arm.

This first shot is to begin to distance yourself from the attacker.

3) The defender steps back, and takes a second shot from the same hand position. 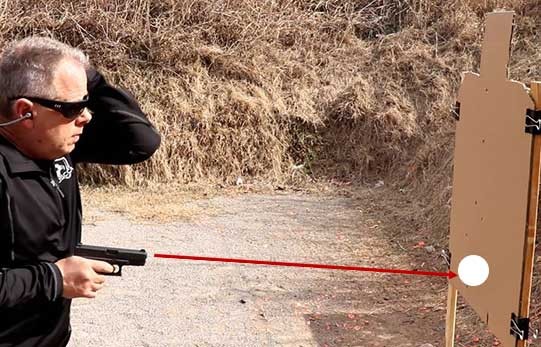 This is to further distance the attacker from the defender. There is no hesitation between steps and shots.

4) With another step back, the defender gets two hand control. 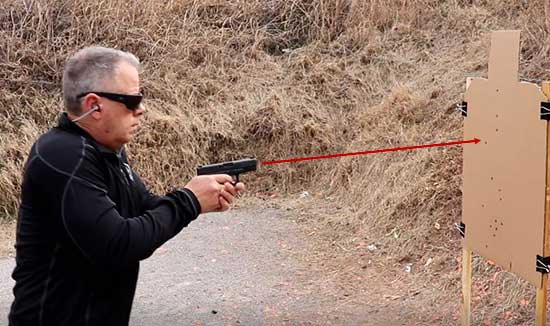 And fires again, this time at center mass. At this point the defender has put some space between him and the attacker, allowing for a conclusion of the defense.

5) One more step, and the defender should have full control of the pistol.

And a final shot is taken.

It should be noted here, that this drill drives towards a practiced, instinctive process, that is only seconds long.

Below is a picture of the progression of the 4 shots, sometimes referred to as the "zipper" effect. That is because of the placement of multiple shots, low to high, maximizing injury and bleeding in an attacker. 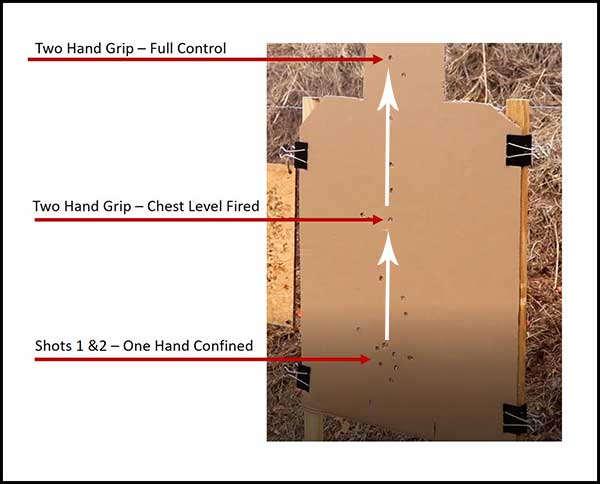 If you'll make note, from the video, the last shooting clip: From the time my guard goes up, to the time of the fourth shot is just over 5 seconds.

The process here is one intended to stop a deadly threat. There is no time for hesitation.

CRITICAL: Keep in mind that the drill here is designed to practice for maximum damage to a determined attacker. The distance put between the defender and the attacker is to give the defender time to effectively stop that attack.

The distance created by the first two shots happens in a couple of seconds, and is not an "escape" from an assault that is intended to kill the defender. It only provides a minimal time frame for the defender to disable or kill his attacker.

In this type scenario, defending and shooting, the result would likely be fatal to the attacker.

In all of this, it clarifies the reason for every move and every shot ....

In about 5 seconds of life or death.