*This article was edited in 2019. The gun used in the picture is a Para Expert Carry with 3" barrel. Short barrel, but the grip is standard 8 round mag size.

Notice I didn't say "brand". I said "style". Consequently there is a huge number of holsters made for this type gun. Every major gun manufacturer that makes full size metal frame guns makes one or more versions of the Government 1911.

Some companies, such as Kimber, Wilson Combat, and others are companies that exclusively make many styles of 1911 pistols. Consequently, when you go holster shopping, it can get pretty confusing.

All information in this article is based on carrying the gun in condition 1, or cocked and locked which is the way it was originally intended to be carried. ...

Practice With The Safety Features Before Carrying

But first before carrying the 1911 pistol, like carrying a GLOCK, it takes a mindset that is convinced that the gun will work the way it is supposed to. Second, it takes practice handling the gun to get used to the safety mechanisms and the operation of the gun.

To carry the Government 1911 pistol safely will require complete familiarity with the gun. I have read in a multitude of reviews and will repeat here, it is not a gun for novices to pick up at the store, shoot a couple of times and stick in a holster as a carry weapon.

Having said that, getting used to the safeties on modern 1911 pistols takes just using the gun until you are convinced. Take the unloaded, verified, verified and re-verified unloaded gun, cock it, flip up the thumb safety and pitch it across the room on the floor.

Do anything you want with it....the hammer won't drop as long as the thumb safety is flipped up and the grip safety is not.....gripped. Carry it for a week unloaded and get used to holstering and unholstering until it's natural.

Like the GLOCK it does not have a decocker, and cannot be safely thumb decocked by pulling the trigger and dropping the hammer. You're begging to shoot something unintentionally going that route.

The bottom line is, carrying the 1911 pistol in ready to fire condition requires loading, cocking, safety up, in a holster and left there. Daily unloading the chamber will be necessary for safety in a household full of people other than the owner.

Holsters Required For The 1911

The Government 1911 handgun, like other guns can be carried in a variety of ways as long as it involves a holster.

Sticking it down your pants, or letting it ride loose in a purse or pocket is not advisable unless you want to shoot off whatever it's pointed at. 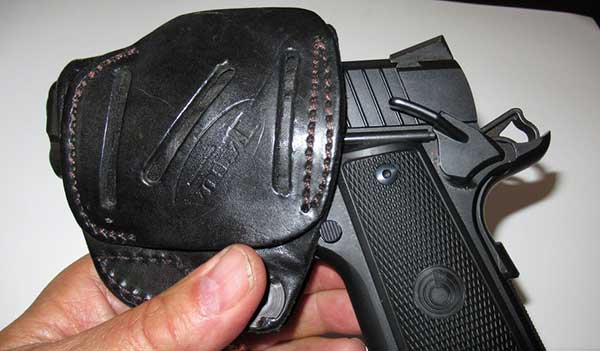 Holster Carried as intended in cocked and locked condition

The most important features in a holster will be secure seating of the gun, and coverage of the trigger guard so you cannot access the trigger unless the gun is drawn. This allows carry in a cocked and locked position (cocked with thumb safety up).

The original Government 1911 was intended to be an open carry, holstered sidearm for the military. For all the refinements and do-dads that have been added, it still works and looks pretty much like the original.

It comes in different sizes, colors and configurations, but it still has the original shape including the infernal extended beaver tail grip. Infernal, because a primary form of holstered concealed carry is in inside the waistband holsters. 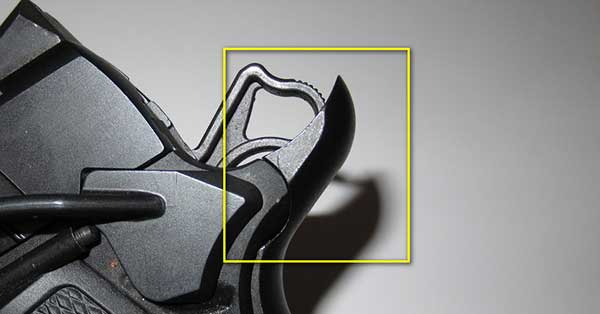 With IWB carry for this gun, you'll likely have to find that "just right" position on your belt line, even with a shorter barrel.

Because with the pronounced beaver tail, it can be like being jabbed in the side with a butter knife all day.

It is best suited for belt holsters which generally require some kind of cover garment such as a suit jacket or long casual jacket.

To carry a full size gun in a belt holster without it printing significantly, you just about have to wear a buffalo skin over it. The 1911 has the advantage of a comparably thin profile but is still large for concealment in a belt holster.

In any case, this is the reason I don't generally use mine as one of my concealed carry handguns.

Carrying the 1911 pistol concealed is not unusual, but is usually done with a commander size weapon (4" barrel) or smaller. And it's generally carried in a belt holster under a very loose shirt or under a jacket.

But, whatever you use as your cover garment, if you cock it, put the safety on, and put it in a secure holster, the Government 19ll pistol will allow safe carry and serve you well as a self defense handgun.